All yesterday I was going over Saturday’s recordings in my head. In particular, Sleep All Day. I knew it was a bit rough, I knew I hadn’t found my voice for the vocal, I knew the guitar was a bit lame… but it was fine for the songwriting competition entry. I was going to add a heap to it later, and I would definitely re-record the vocal once there was a bigger foundation. But I just couldn’t get it out of my head. In particular, there’s this little guitar bit that doubles the vocal line at the end of each verse, and it just grated.

On Sunday afternoon I went to 303, a local bar, for the bimonthly meeting of the Darebin Songwriters’ Guild. The Guild meetings are an organised open stage where local songwriters play three or four of their compositions one after the other, with a feature artist slap bang in the middle. Yesterday’s feature artists were my friend Frank Jones (of Whirling Furphies fame — but I know Frank because when I first moved to Northcote I lived across the road from him; plus our kids went to the same school) and his friend Brent Parlane. I also saw Fiona Claire and Phil Hudson, former bandmates from various other bits of my life. All in all it was pretty inspirational; and while I was walking home in the hail I decided to re-record Sleep All Day with acoustic instead of electric guitar. I will still record electric over the top of it for the finished version; but the little melodies that double the vocals need to be just on the acoustic, so they don’t leap out so much.
This morning after the kids went to school I set up my studio again in T’s bedroom.

I only did three takes with the acoustic guitar because I have a weak thumb on my left hand and it’s hard to play barre chords on an acoustic (with higher action and thicker, tighter strings) for long. I didn’t get a perfect one — each take has the occasional buzzy or muted chord where my pissweak thumb gave way — but I managed to buzz in different spots each take so I used the best take and cut in chords from other takes where the buzzes were too prominent. This is now a finished track 🙂
Next I re-recorded the vocals. My voice is still quite out of condition, and of about ten takes I still got none I was happy with. However i was able to assemble a track out of three different takes that was significantly better than the one I did on the weekend, and I have decided to be satisfied with it for the competition entry recording. For the album, I will record all the vocals towards the end.
Anyway, I ended up with a much better version of Sleep All Day, all new except for the harmonica solo (which has an awful squeak in it that’s driving me crazy, but it’s just about perfect apart from that so I am leaving it).
sleep all day v2.mp3
When I was mixing it and EQing it and all that this evening, I drove the kids crazy (especially T) by playing it through the hifi over and over again til it was right. But they made some helpful suggestions, including to play some piano accordion in the verses. I can hear it in my head now, and I’ve decided I will keep working on this song until it’s done — acoustic bass guitar, some delicate drumming, electric guitar and the accordion of course.
An aside about the guitar 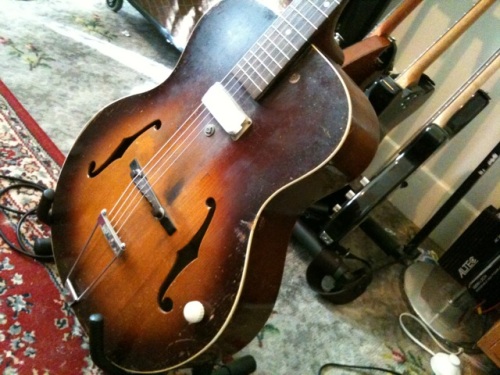 I picked up this guitar about 16 years ago from Roger Lewis’s store in Russell Street. It was $900 and, with me living from hand to mouth in those days subsisting on Austudy and Family Payments, I had to pay a deposit and then pay Roger off over about six months. It’s an early Australian made guitar, made by Maton in 1957. in those days the serial numbers were simply sequential — so I know that mine was the 776th guitar they ever made. Acoustic guitars, like good wine, improve with age as the wood mellows. This one has its flaws, but such a beautiful tone that you put up with the odd buzz and the fat, short neck. With an original hand-wound bakelite pickup, it sounds incredible through an amp too (though it hums a bit). But I plan to record it acoustically.