One of the really important parts of this project is listening to music recorded by others. I’ve been quite deliberately listening to a lot of music that has sounds and feels and production values that I like and that I think accords with what I am trying to do. Some of this has been music with prominent acoustic guitar (such as the Indigo Girls and Jakob Dylan’s solo albums), while some of it has been the messy but energetic and exciting rock of artists like Okkervil River and Neil Young.

One album that has been unexpectedly inspirational has been Dan Kelly’s Dream, released this month. I stumbled across it while searching for a CD to give to a friend for his birthday (I bought him Sgt Pepper and snapped up Dan Kelly’s Dream for myself) and discovered that, like me, Dan had recorded the album largely himself (though with a few helpers) and using a weird-arse guitar (in this case a Japanese Fender Jaguar) with an imperfect but idiosyncratic sound. He’s been really creative and bold with is arrangements, and his lyrics are probably more witty and in-your-face than usual. I’ve been listening to it over and over???
???which is how I got the name (that name) for my album. There was a lyric in one of his songs: “how many times must I repeat myself/how many times must I defeat myself”. He was singing about making the same fucked up choices over and over again. I had been thinking the same day how so many of my songs are about the same types of situations, repeated again and again over two and a half decades of my life. Here I was bringing together songs from 1998 and from 2007 lamenting the same foolishness, describing the same heartache. And here I am recording them by myself: first playing the acoustic guitar four times over; then the bass six times over; then singing the lyrics three times over; then playing electric guitar eight times over; then playing it all back 20 times over while I mix and edit and try to get it sounding right. So much repetition. So Over and Over seemed the perfect name for the album.
Doing it again
So I returned to Fly Away, the song that just wouldn???t come together last time. the acoustic guitar was ordinary. The electric rhythm guitar was out of tune. The electric lead guitar needed something??? it just need more presence or something. The acoustic bass guitar didn’t seem to anchor it properly. The vocal was OK though, and the guitar solos were sort of alright. What to do?
1) new bass guitar
I put the acoustic bass guitar away and grabbed the electric. Unfortunately this is my crappiest guitar. It’s a functional but elementary low-end bass I originally bought for my daughter T when she was learning at school. It’s actually pretty OK, but I’ve spent enough time as a professional musician and using professional grade equipment to be quite unsatisfied with it. I hoped (correctly it turned out) that my rather excellent bass amp and speaker cabinet would turn  this sow’s ear into at least a polyester purse. 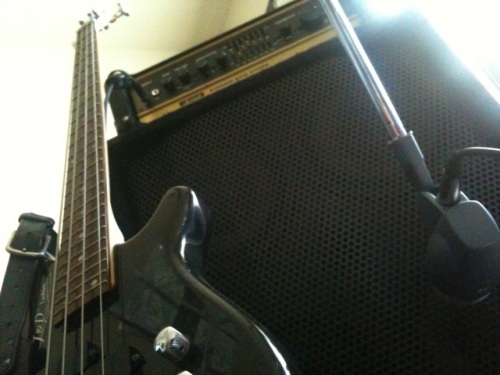 I’m recording the bass using a direct line as well as an economical but quite good quality dynamic microphone designed to record a bass drum. It works brilliantly! It’s really helped by the amp and cabinet combination. The amp has a valve pre-amp, a six-band graphic equaliser and a built-in compressor; the cabinet weighs a ton (actually 23 kg) and has four 10″ speakers and a 5″ tweeter. Altogether this gives a punchy and round sound with some delicate highs but a fat bottom end. I’m amazed I can get such a great sound from a $300 bass guitar. And my guess was right: the smooth, more consistent and incredibly punchy bass is perfect for the song.
2) The guitar parts
After recording the new bass line I muted all the tracks except the bass and the vocal and recorded a new acoustic guitar track. Much better. I then re-recorded the rhythm guitar with the instrument in tune. Marvellous! This left me with the lead guitar part to deal with. I’d pretty much figured out that at least part of the track ??? these little half chords that ring out in between the verses ??? needed more sustain. This suggests using a solid-body electric guitar (I had so far only used the semi-acoustic L-202), so I bought a set of guitar strings and dragged my old Maton Mastersound MS-500 out from under my bed. 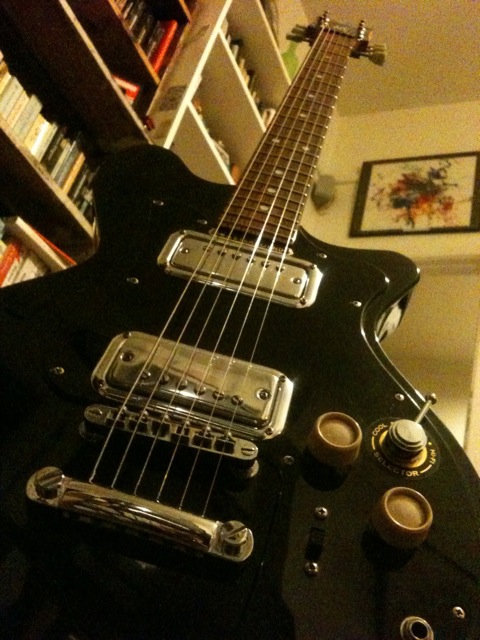 This used to be my main guitar before I bought the L-202 last year. In many ways it’s a better guitar: it has a fuller sound, a better neck, no buzzes and it stays in tune for more than one song. i prefer the L-202 for its very distinctive retro sound, but the Mastersound is really a workhorse guitar. With a rear single coil pickup and a front humbucker that can be switched to single coil, it can emulate the most common guitar sounds (the Les Paul, the Telecaster and the Stratocaster) readily. If I played in a cover band this would be my top choice of guitar ??? you can go from Jimmy Page to Jimi Hendrix with the flick of two switches.
I was right about it, too. it was the perfect guitar for Fly Away.  And the song was really improved by having a greater difference in tone and feel among the electric guitar parts. I decided there and then to use both guitars in future recordings as a matter of course, rather than playing different parts on the same instrument.
Fly Away
It was done then. it still lacks something (apart from drums, which all the songs are lacking so far), a different instrument altogether for the instrumental break and probably a bit of noodling around in other places too. Perhaps piano accordion (by now I had written but not recorded the piano accordion part for Sleep All Day, and thinking of using it in a few other songs as well); though I may have a stab at synthesiser, or perhaps just do a harmonica solo. But whichever way it will go, I now have a rough mix of Fly Away to share with the world (or at least the part of the world that is reading this blog)
fly away rough.mp3
Life intrudes
Following the completion of Fly Away I became quite preoccupied and busy thanks to the looming federal election. I had sort of accidentally volunteered to coordinate volunteers on election day for GetUp!, handing out “scorecards” at my local polling booth showing where the three major parties stand on a number of policy issues relating to social justice.

Had a fantastic time! We had more volunteers than all the political parties combined at our polling booth. And I was pretty pleased to discover that in our electorate, the safest seat in the country (held by Labor with a 27% margin), 25% of first preference voted went to the progressive Greens party. At the end of the day Labor won the seat of course, but their margin was down to 16%. That???s quite an achievement I reckon, and a sign I think that Australian voters are more actively rejecting the two-party system (reflected of course in the overall election result in which neither major party gained a majority of seats).
Enough for now! Another chapter coming soon with two more songs.